A New Kind of Pipeline 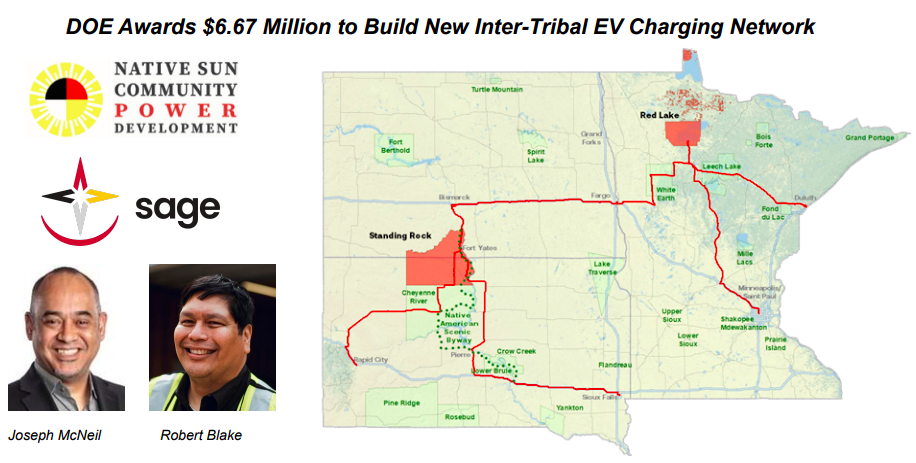 Last week, the federal Department of Energy awarded 6.67 million dollars to support the construction of an Inter-Tribal Electric Vehicle Charging Network across Minnesota and the Dakotas. The primary recipients of this grant are two native-led energy organizations looking to make change. Here’s Bob Blake, a citizen of the Red Lake Nation in Northern Minnesota. He is also the owner of Solar Bear, and Executive director at Native Sun Community Power Development, the Minnesota Based organization who spearheaded the Inter-Tribal EV Charging Network idea.

“The project is an electric vehicle charging network that is going to stretch from Minneapolis, St. Paul, the Twin Cities, all the way up to the Red Lake Nation, encompassing all 11 tribal nations in the state of Minnesota, and then over into North Dakota, to the Standing Rock Tribe, and then down into South Dakota, back to back to Minneapolis,” said Blake.

The project partners will install 63 Level 2 Electric Vehicle Charging stations, the most prevalent style in the United States. They will also install 59 fast-charging hubs in Minnesota, North Dakota and South Dakota. Over the 3 years funding window, they will also lead education and outreach at 52 events intended to support & motivate broader use and access to EVs across the Upper Midwest.

“We’re gonna be able to deploy these charging networks into these communities that traditionally have not been able to receive this type of technology and this type of opportunity. Along with this, we’re also going to be able to get some electric vehicles, buses, for the schools, and vans that do medical runs. So we’re not only doing an electric vehicle charging network, but we’re also getting vehicles for the communities, too,” said Blake.

Minnesota Tribes and environmental advocates have been the subject of scrutiny as the tar sand Pipeline known as “Line 3” was installed, which was completed this fall. Blake says that he saw an opportunity to take back the narrative and the term “pipeline” for a better environmental future for Minnesota.

“When I was thinking about this grant and you know, how to put it together, I just thought about, you know, the oil pipelines and Dakota Access Pipeline and everything that happened over there at Standing Rock…. the Line 3 situation that was happening up at Red Lake. And I thought to myself, What if we put together an EV pipeline, an electric vehicle pipeline? And then I asked Joe, would he be a part of this? And he said, Absolutely, Bob, I’d love to work with you,” said Blake.

“Joe” is Joseph McNeil, General Manager of SAGE Development Authority, on the Standing Rock Sioux Tribal Nation, in what is now known as North and South Dakota. SAGE is now one of dozens of organizations across Minnesota and the Dakotas that are partnering to make this project possible. Other partners include the Red Lake Nation Fisheries, the North Dakota Clean Cities Coalition and the American Lung Association. McNeil explains the importance of the Inter-Tribal EV Charging Network:

“I think it’s important because those are the things that we can use to benefit our communities, by our own voices, our own hands, our own decisions, because we know what’s best and what’s needed in our communities,” McNeil.

“So to have exposure to this type of technology, I think is critical for us to make it a part of our real life that we’re not going to be left out.
So We’re really excited about that. So people can get a hands on learning about and how does electric electric voltaic fuel cells work, what its maximum capacities are, what its drawbacks are. And so we can get kids as head spinning, you know, how can they make this better? How can they make this work for them? You know, basically for us. So like kids have that kind of exposure level touch, feel, see, get the head working about it. And, you know, we intend to hopefully lead lead us into the future.” said McNeil.