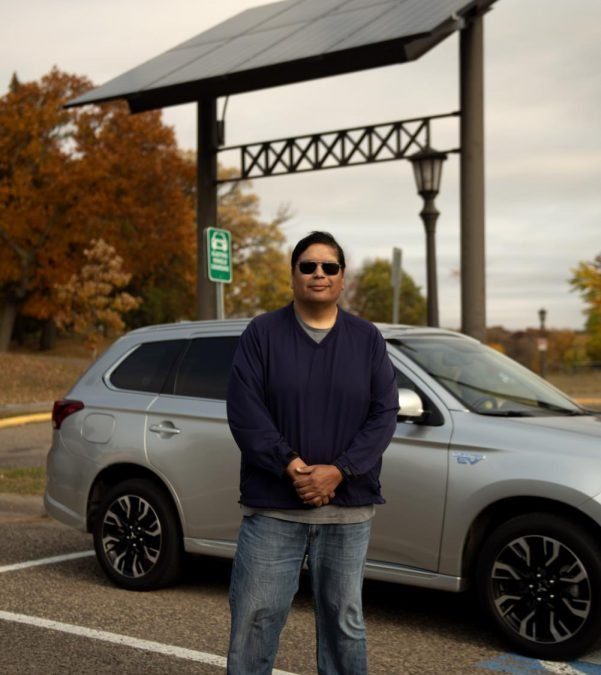 Bob Blake said sometimes he thinks he is addicted to solar.

With the solar industry constantly evolving and changing, the incoming University of Minnesota graduate student will often spend all night reading about new updates in solar technology and brainstorming new ways to incorporate those into his practice.

Through the creation of Solar Bear Solar Panel Installation Services and the nonprofit Native Sun Community Power Development, Blake is utilizing solar energy to power change in his community.

Blake said a main driver of his work stems from the tangible effects of fossil fuel use on fisheries in the Red Lake Nation, where he is from. For thousands of years the tribe has relied on walleye as a staple of their diet, but recently noticed a spike in mercury content in the fish, a result of contaminated water due to fossil fuel burning.

This discovery has emphasized the importance of moving away from fossil fuel energy sources, Blake said. Building a power network that uses renewable energy fosters resistance into areas affected by climate change, and creates opportunities for the tribe to take care of themselves in the event of a natural disaster, he said.

Blake said there is a lot of technical work that goes into building, installing and keeping up solar energy projects, and through his construction company Solar Bear, he has been able to train Native American people in his community and others through an equitable mission.

Founded in 2017, Solar Bear works to challenge the prison-industrial complex by collaborating with the Minnesota Department of Corrections. The company trains formerly incarcerated people in solar installation so they have the skills to enter the solar industry after serving their time, ultimately in hopes of decreasing the chances a person would reoffend and be incarcerated again.

According to a 2018 report from the Bureau of Justice Statistics, 83% of prisoners nationwide released in 2005 were rearrested within nine years of their release. Native Americans are also disproportionately impacted by the criminal justice system, making up 1.3% of Minnesota’s population but 7-22% of prisoners.

“It’s more than just a solar project. It’s a tool for economic development. It’s a job creator,” he said. “And it’s also this opportunity for the tribe to start going down a road free from fossil fuels.”

Part of Blake’s Ph.D. will be analyzing the effect renewable energy has on public health issues in tribal communities like alcoholism, domestic abuse, drug addiction and crime, which stems from historical disenfranchisement and systematic issues as a result of colonialism.

The Native Sun Community Power Development is a nonprofit Blake also founded that launched in the summer. Native Sun integrates Ojibwe language and culture into the conversation about renewable energy. The nonprofit focuses on four areas including solar workforce development, K-12 education about climate change, Native community workshops and hands-on sessions and outreach in the form of an “eco-bus,” which will travel to neighboring pow wows.

In creating their own energy source, staffed by and run by members of the Red Lake tribe, Blake said Red Lake will be investing more money back into their community and creating more opportunities for people to stay.

Without partisan gridlock, Blake said this work is also an opportunity for Native people to make a statement and take the lead in renewable energy, especially in light of the United States officially backing out of the Paris Climate Agreement in 2019.

“The technology is here, and we as a society need to start moving in this direction because the old one is collapsing,” he said. “We have to do this.”

Ralph Jacobson has been in the solar industry since 1979. And when he heard about what Blake was doing in Northern Minnesota, he wanted in.

With a larger market for solar and the price of solar technology becoming more affordable, Jacobson said solar energy is the new frontier for renewable energy. Helping communities that have been historically disadvantaged access and reap the benefits of owning solar power will result in wealth generation, something that has often been limited to white people, he said.

Lisa Daniels, the program director of Native Sun Community Power Development, said based on her 25 years of experience in the wind industry, renewable energy is a very white field, which makes the work Blake is doing all the more important.

“This is hugely ambitious,” Daniels said. “Not only are we working to put it in new energy infrastructure, but we’re working to grow a new economy that can take them forward.”

Blake said with these projects he wants to set a precedent for other communities and tribes to do this work too. He said he finds comfort knowing that the solar panels they install will outlive him.

“The idea here is that this entity will be run for and by the community. And my hope is that this could be replicated in other tribal nations but also in other towns. Because, you know, climate change isn’t only going to affect Red Lake,” he said. “And I think this is the way we do it.”